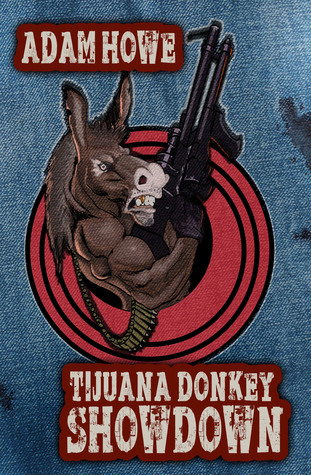 Reggie Levine, ex-boxer turned bouncer, and hapless hero, has barely recovered from his ordeal in Damn Dirty Apes, when he is called back to action. Recruited to a retrieve a Chinese crested terrier from a fleapit roadside zoo, where the ugly effing showdog has been mistaken for the chupacabra, Reggie finds himself embroiled in a deadly criminal conspiracy involving neo-Nazi drug smugglers, a seedy used-car salesman, a wannabe serial killer, an ornery Vietnam veteran, a badass veterinarian, a freakishly endowed adult entertainment donkey named Enrique, and in an explosive cameo, an Academy Award winning Hollywood icon.

Tijuana Donkey Showdown is the second book that features Reggie Levine. He also appears in Damn Dirty Apes which is one of three novellas that feature in Die Dog or Eat the Hatchett. I wouldn’t say it is essential to have read Damn Dirty Apes first, but I think it will give the reader a better idea of Reggie and what happens in the first book and how it fits into the second novel.

If you haven’t read anything by this author before then open your mind to a very warped ride. His books certainly won’t be to everyone’s tastes, but if you like a far out read that’s a bit tongue in cheek, well, you are going to love it.

Head bouncer Reggie is back and boy is the reader in for a fun journey. Getting caught up in a toilet brawl, Reggie finds himself getting involved in another mans mess which ends up turning into a bit of a disaster.

Who knew that trying to get back a missing dog would end up with Reggie and his friends fighting for survival. Gizmo really does not envision pleasant thoughts, he sounded like one of the ugliest dogs I’ve ever heard of. Obviously beauty is skin deep but there really was nothing nice about this leg humping mutt. I have to admit at feeling a bit bad about laughing at something that happens to Gizmo but won’t say what as wouldn’t want to spoil it for others, but it was rather funny.

It’s obvious that Nicholas Cage is a bit of an icon for the author. He even gets his own cameo appearance in the book. I’m actually a bit of a fan of this actor and loved how the author includes him into the story and thought it all flows brilliantly.

Tijuana Donkey Showdown is the perfect read if your an action fan. It reminds me a lot of the Hollywood block buster movies like Big Trouble In Little China where there is a certain amount of humour in them. A highly enjoyable read that is totally bonkers with some really stand out characters. Loved it!

My thanks to the author for a copy of this book. All opinions are my own and not biased in anyway.

Tijuana Donkey Showdown is out on the 9th of December and available to pre order on Amazon now.