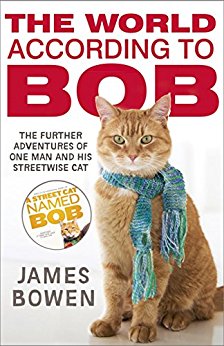 The incredible sequel to the bestselling A STREET CAT NAMED BOB – the moving and uplifting true story of an unlikely friendship between a man on the streets and the ginger cat who adopts him, soon to be a major motion picture starring Luke Treadaway.

‘Since Bob has appeared, I’ve made huge strides in my life. For more than a decade I was a homeless drug addict. I was lost to the world and had forgotten what was important in life. Now I’ve got myself back on my two feet, but as I put the past behind me, I’m still stepping unsteadily into the future. I still need help in the right direction. Bob is always there to offer guidance and friendship.’

James and his street cat Bob have been on a remarkable journey together. In the years since their story ended in the bestselling A STREET CAT NAMED BOB James, with Bob’s help, has begun to find his way back to the real world.

Almost every day, Bob provides moments of intelligence, bravery and humour, at the same time opening his human friend’s eyes to important truths about friendship, loyalty, trust – and the meaning of happiness.

In the continuing tale of their life together James shows the many ways in which Bob has been his protector and guardian angel through times of illness, hardship, even life-threatening danger.

As they high five together for their crowds of admirers, James knows that the tricks he’s taught Bob are nothing compared to the lessons he’s learnt from his street-wise cat.

After reading and loving A Street Cat Named Bob, I was desperate to know and find out more about Bob and James’ journey.

James’ first book opened my eyes to so many things in the last book. Whilst the start of The World According to Bob carries on with James and Bob taking to the streets of London selling The Big Issue, I think because James goes into more detail of day to day life for him and Bob it took slightly longer to grab me like the first one, but when it did all those emotions that I felt in the first book came rushing back.

The World According to Bob gives us a bit more insight into working on the streets and the sometimes perils that can happen. James also tells us of how the first book came about which totally fascinated me. It’s a bit like meeting up with an old friend and them filling you in on whats been happening to them.

This is a book that made me laugh out loud at some of Bob’s antics as well as smiling. It also made feel sad and angry at the injustice of some peoples actions. It gives readers hope and I know I for one am a sucker for a happy ending, especially when it’s in real life. Getting to the end of the novel had me in tears, mainly because I was just so happy for James and Bob but also because I had reached the end and I didn’t want it to. This is truly a wonderful look at an amazing friendship and how it can turn their lives around. Inspirational and moving!

The World According to Bob is available to purchase from Amazon.