Please give a warm welcome to today’s Get To Know author, Susie Lynes. 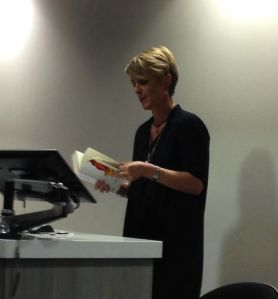 I’m from the north of England. I’m married with three kids: 18, 17 and 11. I’ve lived in Runcorn, Leeds, Spain, Paris, London, Aberdeen, Rome and now Greater London. I started writing ten years ago, when I returned from Rome (we lived there for 5 years) with my family. In Aberdeen I worked as a radio producer for the BBC. And yes, my husband is in the oil industry and did indeed work offshore. I now teach creative writing to adults at Richmond Adult Community College, mentor novelists and sometimes host open mic nights for my students. I had written three novels before I finally broke through with Valentina, which was published July 2016.

You can keep up to date with S E Lynes and her books on the following sites:

The Catcher in the Rye.

That’s impossible! I loved Keith Talent in Martin Amis’ The London Fields, I loved the main character, Benoite-Marie Carr, in Who Will Run the Frog Hospital by Lorrie Moore (it was a relief to find someone as anxious as me), I loved Thomas Cromwell as portrayed by Hilary Mantel. I’ve picked three, so there!

I loved the recent adaptation of Room by Emma Donogue but my all time fave is The Hours by Michael Cunningham – the film was directed by Stephen Daldry with, I think, screenplay by David Hare. The film traces three women in different time zones and is infused by Mrs Dalloway by Virginia Woolf. I had read and loved Mrs Dalloway in my twenties and it definitely enhanced my enjoyment of Cunningham’s novel and then, of course, the movie.

I tend not to snack whilst reading – but I normally have a beer at 6ish once I’ve finished work and that beer gets lonely without crisps.

I have been writing for ten years. It has been a long road. There have been many special moments leading on from Blackbird saying they wanted to publish Valentina – the whole experience has been nerve wracking but fabulous. I need to have three again I’m afraid:

1. Telling my mum Valentina was going to be published – she had waited for me in London and I met her for lunch and as soon as I saw her I told her. We both burst into tears.

2. Telling my husband, who was choked because he knows how much work has gone into this. Even though he believed in me, he feared I would never get there and that it would break my heart. He immediately sent me the words to Blackbird by The Beatles and that was very moving. …take these broken wings and learn to fly…ah, sniff, I could well up now.

3. Holding a paperback of Valentina in my hands. I might be a writer but I will always struggle to put that into words.