A retired detective and a young woman are about to face their worst fears.

Vicki Reiner is emotionally isolated and craves the fleeting happiness she experienced in the years prior to her college graduation. In an attempt to recapture this, she invites her former friend and room-mate, Laurie,  for a break at her deserted beachside home. However, despite booking an online bus ticket, her friend never shows up and seems to have vanished.

Unable to accept the bizarre circumstances of the disappearance, Vicki approaches the police who dismiss her concerns before enlisting the reluctant help of Leighton Jones – a newly retired detective who is haunted by the death of his teenage daughter. Despite trying to remain detached from the case, Leighton is drawn to Vicki and her search for justice.

The unlikely pair face numerous obstacles but using a combination of methods he and Vicki track the killers who are working across the dusty freeways of North America.

Soon Vicki and Leighton find themselves nervously waiting at a remote bus stop expecting the arrival of the bus.

Will they ever discover what happened to Laurie?

And can they both escape with their lives?

This book had me right from the start. It’s one of those books that once started you are seriously going to struggle to put back down again.

Leighton is a retired detective who is a bit of a loner. He chances on Vicki when leaving the police station one day. Vicki takes to the kindly ex detective as he seems to be the only one genuinely taking her seriously. there on in, the pair decide to take matters into their own hands and look into Laura’s disappearance themselves.

I liked the relationship that builds through out the story between the two main characters. In a way I think they both are gaining something from the other person being there and I don’t mean just the case. It’s almost like a father/daughter relationship as well as them both having a strong respect for each other. It was something that by the end of the story made me really emotional.

I don’t want to say to much about the story itself as I think the less you know the better as there were certainly a few omg moments as well as parts that made the hairs on my arms stand up.

The Girl On The Bus is a great story full of suspense and intrigue. It would make a belter of a film. It made me think of The Hitch Hiker though it is a very different story line. There certainly is a mixture of genres, as in crime, suspense, thriller and horror. It was the perfect blend and I am dying to read more by the author.

My thanks to Bloodhound Books for an advanced readers copy of the book. All opinions are my own and not biased in anyway.

The Girl On The Bus is available to purchase from Amazon. 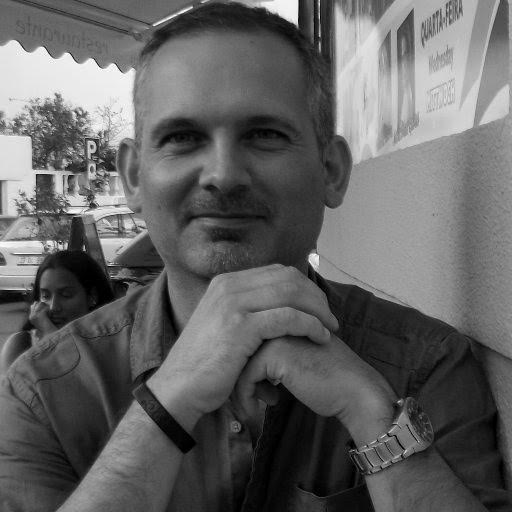 Norman M. Brown is an author living and working in Scotland. He attended secondary school in Stirling where he spent more time in the library or in the nearby park with a paperback, than he did in classes… Ironically, having graduated from Stirling University with a degree in English, he soon ended up back on the classroom again – where he has shared his love of fiction for two decades.

Having experimented with poetry, scripts and short stories over the years, he finally decided to write sit down and write the type of fiction he would like to read. The result was his crime thriller -The Girl on the Bus. As result, Norman was delighted to be signed to Bloodhound Books at the start of this year. The Girl in the Bus, is his first published novel. He is currently writing a second novel based on its protagonist – detective Leighton Jones.