When Jake Boulder is asked by his PI friend to help investigate the vicious murder of Kira Niemeyer, he soon finds himself tracking a serial killer who selects his next victim in a most unusual manner.

As the body count rises, Boulder has to work with the police to identify the heinous killer before more lives are taken. What ensues is a twisted game of cat and mouse, that only Boulder or the Watcher can survive.

I am a huge fan of the authors Harry Evans series so was really excited to see that the author was bringing out a brand new crime series. Loving Harry though I was worried to how much I would take to Jake. The author couldn’t have made both series’ anymore different though so poor Harry Evans didn’t even enter my mind whilst reading this book.

Jake Boulder is the strong and broody type. He came across to me as a bit of a loner. He is happy with his own company, only letting someone in when it suits him.

The story is set in a small town where the local police force probably wouldn’t be the first on the list that you would want investigating your murder! Step in Boulder who has personal reasons in wanting the killer caught.

I loved the way that the killer chooses his victims. It’s a pretty jaw dropping moment when along with Jake we realise how they are doing it. No way did I see that coming!

Watching The Bodies being set in Utah and written by a British author is probably a bit of a risk on the authors part but one that a hundred percent has paid off.  He has really done his homework with americanisms and I totally believed everything that I was reading and didn’t have to question anything.

This is a dark and suspenseful read that just drew me in and placed me slap bang in the thick of things. With a thrilling serial killer and a smouldering Boulder, there is definitely something for everyone who loves a good crime thriller. Great start to a new series and already counting down the days for book two.

Watching The Bodies is available to purchase from Amazon. 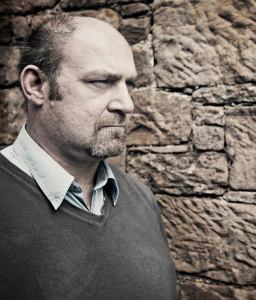 Graham Smith is married with a young son. A time served joiner he has built bridges, houses, dug drains and slated roofs to make ends meet. Since Christmas 2000 he has been manager of a busy hotel and wedding venue near Gretna Green, Scotland.

An avid fan of crime fiction since being given one of Enid Blyton’s Famous Five books at the age of eight, he has also been a regular reviewer and interviewer for the well-respected website Crimesquad.com since 2009

He is the author of four books featuring DI Harry Evans and the Cumbrian Major Crimes Team and one book, WATCHING THE BODIES in a new series featuring Utah doorman, Jake Boulder.