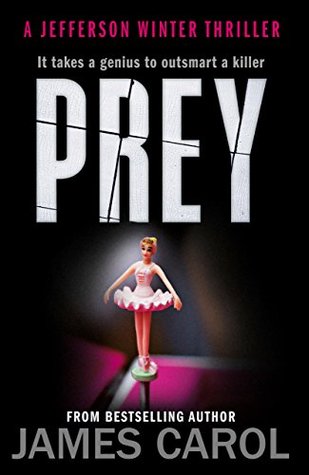 Six years ago a young married couple were found brutally stabbed to death in their home in Upstate New York. Local police arrested a suspect who later committed suicide. But what if the police got it wrong?

Ex-FBI profiler Jefferson Winter is drawn into a deadly cat-and-mouse game with a mysterious female psychopath as she sets him a challenge: find out what really happened six years ago.

The clock is ticking, and as Winter is about to find out, the endgame is everything…

Prey is the third book in the Jefferson Winter series. It is best to probably have read these books in order to get the full enjoyment out of them as Jefferson has one interesting background!

I have to say that this book doesn’t half start off with a bang. I had to re read a part as I couldn’t quite take in what I was reading as I just wasn’t ready for something quite that shocking within the first few pages. The author by doing this though makes sure he has one hundred percent of his readers attention from this point on wards.

You can’t help but feel a bit sorry for Jefferson. He has a high profile due to his notorious father who was a serial killer. It’s something that he is always reminded off and can never quite put behind him. He then meets a woman who seems to have targeted him for who he is and boy does she want to try and mess with his head.

This is very much a story of a battle of the minds. Jefferson and the mysterious female go head to head in trying to out wit each other and boy was I glad that I was there for the ride. It makes for a gripping read to see who was going to win.

Prey is yet another fast paced read that will send your heart racing. An absolute page turner that will leave you wanting more.

Prey is available to purchase from Amazon.