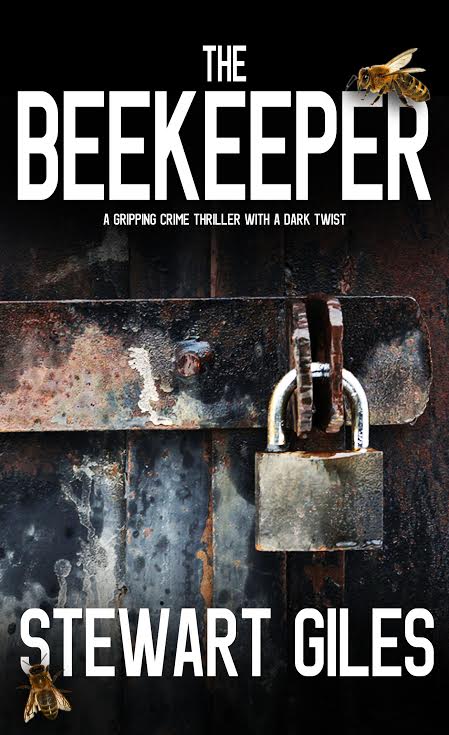 A shocking discovery starts a trail of mayhem on the Cornish coast.

Alice Green is a beekeeper in the small Cornish village of Polgarrow. One evening, Alice finds something strange under the hollyhock bush in her garden.  The gruesome discovery will change everyone’s lives.

Detective Harriet Taylor has just transferred to the area from Edinburgh. As she investigates a series of shocking crimes, she grows close to the old beekeeper and is determined to bring the murderer to justice.

A crime mystery with a streak of black humour. You’ll enjoy this fast-paced and dark unearthing of the underbelly of a sleepy Cornish village.

“I’m going to see to the bees ,” Alice said, changing the subject. “It’s getting cooler outside, so they ought to be quite sluggish.” She was right. The bees were slowly getting ready to turn in for the night. Six boxes were stacked on top of each other under the shade of an old oak tree. Alice slid the lid off the top box and carefully removed one of the beeswax sheets. She held it up to the sun to examine it more closely. The bees clung to the sheet, barely moving. Tiny dots of honey had appeared in the combs. The bees were already busy with their next batch. “Everything seems fine.” She put the sheet back. “I still don’t understand why the honey tastes different.” The garden certainly looked magnificent. The roses against the fence were in full bloom. Red, pink and white flowers hung from thick stems. Bumblebees clumsily bashed into the flowers. The rainwater from the previous evening’s storm had settled on the inside of the petals. “Your hollyhocks are doing beautifully.” Milly came up and ran her fingers over the leaves. “The bees love them. I think those and the roses give the honey its special flavour.” They were just about to go back in when Alice spotted something catching the sun beneath the clump of hollyhocks. It appeared to be metallic. She bent down to get a better look. “What’s that?” Milly had spotted it too. She crouched down next to her friend. “I don’t know. It looks like a ring. It’s half-buried in the soil. I wonder how it got there.” She tried to pick it up but it wouldn’t budge. She took a shovel and jabbed down on it. With one blow, the finger was severed from the hand. Alice picked it up. There was a wedding ring on the finger. And though one gold band looks much like another, the finger it was still attached to, was unmistakeable. The tip of it was missing, just like her husband Stanley’s. Alice gasped and dropped the finger. Milly had fainted. She was lying on the grass, stone-cold unconscious.

* * *
Alice stood by the sink and took the finger out of her pocket. It was dirty , rigid and had a blue tinge. Where it had been severed, it was treacle black. She took some butter and rubbed it around the ring. After a few twists, it came loose and dropped into the sink with a metallic ping. Alice ran some water into the sink, cleaned the soil off and examined it carefully. “S.” and “A.” and “14.6.75” were engraved on the inside of the ring. Stanley and Alice, 14 June 1975. Definitely that ring, then. She was wearing one just like it. She thought back to her wedding day, that Saturday morning in the tiny registry office in Plymouth. It had been just the four of them: Alice, Stanley, Milly and Dennis Albarn, Stanley’s good-for-nothing best man. Best man? Alice shook her head. Dennis Albarn had been the worst thing that had ever happened to Stanley. Dennis had been Stanley’s wingman during all the womanising. And she’d put up with it for thirty years. Thirty years of waiting at home, wondering if her husband would come back this time. And finally, ten years ago, Stanley had gone and not come back. Until now. She put the ring on the draining-board and threw the severed finger into the jackdaw’s cage. The bird sniffed it suspiciously and then started to peck at it. Alice began writing the labels for the honey jars. Seven pounds a jar. No, let’s make it ten. Tourists would pay that for organic honey. That would make the total £ 840. Enough to see her through the rest of the month. She might even have enough left over to buy the huge television set she had her eye on. Her old television was tiny and her eyes weren’t getting any younger. The one she wanted was in a second-hand shop in Trotterdown. By the time she had finished writing and gluing on the labels, it was starting to get dark. The wind had picked up, and the feathers on the tray of eggs were moving in the breeze from the kitchen window. The jackdaw cawed. It was time for his supper. She opened a fresh tin of dog food and scraped a few chunks onto the bottom of the cage. The finger lay there, stripped to the bone. Alice picked up what was left of it and dropped it down the sink. She ran the garbage disposal system, which growled noisily, and it was gone.

Author Bio
After reading English & Drama at three different English Universities and graduating from none of them, I set off travelling and finally ended up in South Africa, where I still live. I enjoy the serene life running a boat shop on the banks of the Vaal Dam. I came up with the DS Jason Smith idea after my wife dropped a rather large speaker on my head. Whether it was intentional still remains a mystery. Smith, the first in the series was finished in September 2013 and was closely followed by Boomerang and Ladybird. Occam’s Razor, Harlequin and Phobia (a series of short stories detailing Smith’s early life) were all completed in one hazy 365 days and Selene was done and dusted a few months later. Horsemen, the seventh in the DS Smith thriller series is out now. The Beekeeper, a departure from the DS Smith series will be released through Joffe Books on 22 May.