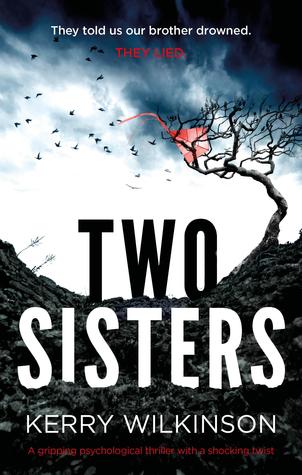 They told us he had been missing for nearly two days, that he probably drowned. They told us a lie.

Megan was ten years old when her older brother, Zac, went missing among the cliffs, caves and beaches that surround the small seaside town of Whitecliff.

A decade later and a car crash has claimed the lives of her parents.

Megan and her younger sister Chloe return to Whitecliff one summer for the first time since their brother’s disappearance. Megan says it’s to get her parents’ affairs in order. There are boxes to pack, junk to clear, a rundown cottage to sell. But that’s not the real reason.

Megan has come to confront her family’s past after receiving a postcard on the day of her parents’ funeral. It had a photograph of Whitecliff on the front and a single letter on the back.

This is the first novel I have read by this author and I will certainly be reading more of his books in future after reading Two Sisters.

Two Sisters is one of those dark and brooding reads. It’s like a pan of water on the stove, gently simmering until all of a sudden it’s bubbling away at a rapid speed.

I felt really sorry for Megan and Chloe. They have lost their older brother ten years before and haven’t had the most perfect relationship with their parents who sadly have both just lost their lives in a car crash. They are still relatively young and Megan feels like she has to be even more in control so that she can take care of her younger sister.

I have to admit I found parts to be uncomfortable due to Megan’s eating disorder. I think it’s brave of the author to tackle such a tough subject in his novel but I personally felt he handled it very well. It’s not something that I have experienced first hand so it gave me some real insight into how someone feels and why they would do what they do when it comes to food. Definitely an eye opener.

I loved the whole setting of the story and could easily visualise the village and the day to day life there. With it being a small village, Megan and Chloe get a very mixed response at them coming back to the cottage. Some seem to friendly where as others make it clear they are not wanted. It is obvious that there are many secrets hidden there and I was as desperate as Megan to find out.

Two Sisters is quite a lot of things. It’s about relationships, lies, deceit and trying to remain in control. Its a very dark read for many reasons but one that will have the reader hooked from the start. This was a great introduction to a new author to me and I can not wait to read more.

My thanks to Bookouture and Netgalley for an advanced readers copy of this book. All opinions are my own and not biased in anyway.

Two Sisters is available to purchase from Amazon.