Today I am one of two stops on the Murder On The Oxford Canal by Faith Martin blog tour. For my stop I am delighted to share a guest post from the author, hope you enjoy. 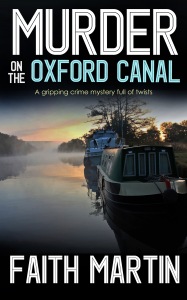 MURDER ON THE OXFORD CANAL is the first in a series of page-turning crime thrillers set in Oxfordshire.

THE LOCATION
The Oxford Canal meanders through the beautiful county of Oxfordshire, sometimes joining up with the rivers Cherwell and Thames, and flows past the world-famous university city of Oxford. Unlike many canals which are practically ruler-straight commercial waterways, built to help transport goods and heavy traffic before the advent of the railways, the Oxford Canal is a more winding and natural-looking body of water, and is a haven for wildlife and wildflowers. It has several romantically-named locks on its length (such as the Three Pigeons Lock, and Dashwood Lock) and boasts the ominously-sounding Somerton Deep Lock, which often terrifies first-time boating holiday-makers.

DI Hillary Greene
An attractive woman in her forties, Hillary Greene is a police officer of many years’ experience, and came up through the ranks. Consequently, she knows how the system works, and is fiercely loyal to the force without being blinkered to its faults. She is a long-standing friend of her immediate superior officer, ‘Mellow’ Mallow and enjoys a rather enigmatic relationship with the steely Superintendent Marcus Donleavy. Popular with the rank and file for her no-nonsense attitude and competence, she is currently under investigation, on account of her recently deceased, and definitely corrupt husband (Ronnie Greene). But adversity has never stopped her from doing her job.

DCI Philip ‘Mellow’ Mallow
Mel appreciates Hillary’s first-rate ability to solve her cases, and isn’t happy about her harassment by the officers from York. Known for his sartorial elegance and laid-back manners, he has a sharp mind, and an eye for the ladies. A good friend and ally for Hillary in her recent tribulations, he’s determined to keep his best investigator focused on the problems at hand.

I was lucky enough to discover Agatha Christie in my early teens, and through her, many of the other wonderful authors of the ‘golden age’ of crime writing.  And I still love reading (and writing) the ‘classic’ whodunit, and all the elements that comprise them.  The requisite 4-6 suspects, the locked-room puzzle, the charming country setting and the very satisfactory grand reveal at the end, when the amateur sleuth reveals his or her cleverly thought-out solution to the crime.  So when I began to write crime, as JOYCE CATO, I naturally began with this genre.

However, the likes of DI Rebus, Jane Tennyson, and Inspector Banks were also being published, and were also proving to be very popular with the reading public.  So when my – now sadly late – agent advised me to try my hand at writing police procedural novels as well, I was certainly willing to give it a go.  But not without a certain amount of trepidation, mind you.   And the main cause of my concern was a certain character called Chief Inspector Morse!

Having been born in the city of Oxford, and having lived in the surrounding area all my life, when it came to choosing the setting for my proposed new series of novels, there was only one obvious choice.  I simply didn’t know anywhere else!  But with the wonderful Colin Dexter’s creation already being held in such high regard and affection, how, I wondered, could my own fictional creation ever hope compete?  How could I, as a novelist, take on such a master?

The answer, of course, was – don’t even try!  So when I sat down and put my thinking cap on, I decided to create someone as far removed from Morse as possible.  So, a woman detective then – and as a female myself, this wasn’t a hard decision!  And since Morse and the city of Oxford are so synonymous, it seemed wise to leave Oxford (mostly) to the great man, and content myself with the other areas that comprise the Thames Valley.  After all, the district offered market towns and villages galore where my new DI could find murder victims.  And since Morse worked more or less alone with only Lewis to help him, I would put DI Greene in charge of a small (and rather dysfunctional!) team.  Lastly, since Morse worked out of Oxford itself, I would have my own DI report to Kidlington HQ.

And from this starting point, I then gradually began to get to know my new DI.   I wanted to make her interesting, but not unbelievable.  So I gave her a recently deceased husband, who had been something of a bad ‘un  (to say the least) and who had left her in somewhat tricky circumstances.  So when the reader meets her, she has been reduced to living on a relative’s canal boat, and is being pestered by the officers who are investigating her husband’s past criminal activities.   I wanted Hillary to be intelligent (so gave her a good education) but not closely connected to the university (Morse territory.)   I also wanted her to have gained experience by coming up through the ranks.  This would make her both savvy and also popular with the rank-and file, who would regard her as ‘their kind of copper’.   She had to be tough, but not hard-bitten, and have no illusions about her workplace and job, whilst being fiercely loyal to her team.   Most of all, I wanted her to the kind of copper you would want investigating the case if ever you were unjustly accused of murder!

And when I finally created my first file, and typed in the magical (and terrifying) words CHAPTER ONE, I knew that I wanted her to have a sense of humour that would see her through the darkest of times.