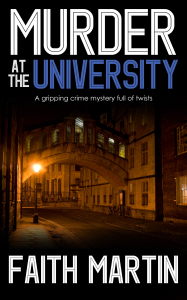 Looking for a brilliant murder mystery with a feisty female detective?

MEET DI HILLARY GREENE, A POLICE WOMAN WITH A THIRST FOR JUSTICE AND A COMPLICATED CAREER

A pretty French student is found dead in her room at an exclusive Oxford college. Everyone thinks it is another tragic case of accidental drug overdose.

But Detective Hillary Greene has a nose for the truth. She quickly discovers that the student had been up to some very unusual activities.

With a shocking cause of death found, the case becomes a high-profile murder investigation.

Adding to the pressure, Hillary’s nemesis is transferred to work with her at the station.

Can Hillary keep her cool and get justice for the unfortunate student?

MURDER AT THE UNIVERSITY is the second in a series of page-turning crime thrillers set in Oxfordshire.


THE LOCATION
The Oxford Canal meanders through the beautiful county of Oxfordshire, sometimes joining up with the rivers Cherwell and Thames, and flows past the world-famous university city of Oxford. Unlike many canals which are practically ruler-straight commercial waterways, built to help transport goods and heavy traffic before the advent of the railways, the Oxford Canal is a more winding and natural-looking body of water, and is a haven for wildlife and wildflowers. It has several romantically-named locks on its length (such as the Three Pigeons Lock, and Dashwood Lock) and boasts the ominously-sounding Somerton Deep Lock, which often terrifies first-time boating holiday-makers.

DI Hillary Greene
An attractive woman in her forties, Hillary Greene is a police officer of many years’ experience, and came up through the ranks. Consequently, she knows how the system works, and is fiercely loyal to the force without being blinkered to its faults. She is a long-standing friend of her immediate superior officer, ‘Mellow’ Mallow and enjoys a rather enigmatic relationship with the steely Superintendent Marcus Donleavy. Popular with the rank and file for her no-nonsense attitude and competence, she is currently under investigation on account of her recently deceased, and definitely corrupt husband (Ronnie Greene). But adversity has never stopped her from doing her job.

DCI Philip ‘Mellow’ Mallow
Mel appreciates Hillary’s first-rate ability to solve her cases, and isn’t happy about her harassment by the officers from York. Known for his sartorial elegance and laid-back manners, he has a sharp mind, and an eye for the ladies. A good friend and ally for Hillary in her recent tribulations, he’s determined to keep his best investigator focused on the problems at hand.

PLEASE NOTE THIS IS A REVISED EDITION OF A BOOK FIRST PUBLISHED AS “ON THE STRAIGHT AND NARROW.”

This is the second book in the DI Hillary Greene series, having not read the first book in the series I would personally say it can be read easily as a stand alone though I am intrigued with Hillary’s past to do with her husband especially.

With is being set in Oxford I had visions of it being like the Inspector Morse crime series. Having only ever watched the series though and not read the books I couldn’t really compare the two but it certainly feels like we get to see a side of Oxford that we don’t in the Inspector Morse series.

I liked Hillary, through her character there is a bit of humour in parts which you don’t usually get in many crime books which makes it more unique. She is someone that people can get on with easily and seems to be a bit of an all rounder.

As for the case they are working on I certainly couldn’t have figured out who the murderer was. The author certainly seems to spread out the case, Hillary’s personal life as well as working life so you get an even feel of what her life is like. I have to admit due to this the pace that I usually prefer in my crime books was slightly lacking but I think if you prefer a more slower pace to your crime books where you get an overall picture then this is the perfect book.

Murder At The University overall is an enjoyable crime book. There’s no getting away that it is set in a great area and I love that the main character currently lives on a boat. The author has certainly made sure that her crime series is quite different to the other books out there in this genre which I think could certainly work in her favour.

My thanks to Jill Burkinshaw and the publisher for an advanced readers copy of this book. All opinions are my own and biased in anyway.

Murder At The University is available to purchase from Amazon. 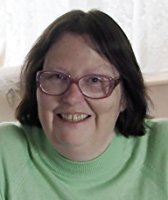 Faith Martin has been writing for over 25 years, in four genres and under four different pen names. She was born in Oxford and sets most of her crime novels within sight of the city of dreaming spires. A real nature lover and afficionado of the countryside, descriptions of wildlife and native flora often find their way into her manuscripts. Right now, JOFFE BOOKS are re-issuing the first eleven of the DI Hillary Greene novels in new updated editions! And the first of these, MURDER ON THE OXFORD CANAL is available now, with the others to very quickly follow.

Her romance novels, written under the name of Maxine Barry, are now available from Corazon Books. IMPOSTERS In PARADISE, and HEART OF FIRE are both out, and others will very quickly become available in the future.

Her first foray into writing ‘spooky’ crime, (and written under the pen name of Jessie Daniels) comes out in November 2017. THE LAVENDER LADY CASEFILE is published by Robert Hale, an imprint of Crowood Press.

As Joyce Cato, she writes more classically-inspired ‘proper’ whodunits. So if you like an amateur sleuth, plenty of clues and red herrings, plus a baffling murder mystery to solve, these are the books for you.