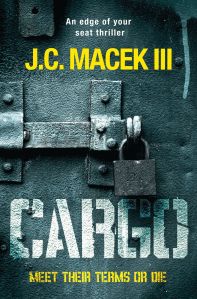 Over the years Anthony Peterson has amassed a fortune, numerous properties, a trophy wife and a reputation for ruthless business dealings. He is a man who is used to getting his own way.

But when Peterson wakes to find himself locked in a metal shipping container, with only a cell phone and twenty-four hours of air left, he begins to unravel.

Desperate to escape Peterson soon learns that there is more to the container than he first realised. And when the kidnappers call and demand ten million dollars, while threatening to murder and rape his beautiful wife if he doesn’t comply, Peterson must fight to meet their impossible terms or face being left to die alone in the darkness.

Why has Peterson been targeted?

Who are those responsible for his kidnap?

And will Peterson make out of the container alive?

Cargo is an edge of your seat thriller about the choices we make.

Every once in a while, a book comes along and literally knocks you off your feet and this is exactly what [Cargo] did. From the book description I knew the author was going to take me on a thrilling journey but didn’t realise just how many thrills were in store for me.

The story is set over the course of twenty four hours which gave the story more urgency and set the pace fast. From picking the book up I literally could not put it down and read it in one day.

I was as desperate to know as Peterson himself, why the kidnappers would choose him above many other rich people. You could be mistaken in thinking that a story about a man locked up in a container couldn’t possibly be that thrilling, but boy it has to be one of the most thrilling as well as chilling reads I’ve read in a while!

The least you know about this story the better before heading into it. It is very much a race against time which literally had me on the edge of my seat and left me feeling on a high as I had been so invested in Peterson and what was happening to him and it didn’t disappoint one little bit.

[Cargo] is a must read for fans of fast paced, adrenaline fuelled thrillers. There is plenty of hair raising moments that sent shivers down my spine and made my skin crawl. I absolutely loved every minute of it and can not wait to read more by the author.

[Cargo] is available to purchase from Amazon. (Please note that link used is an affiliate link) 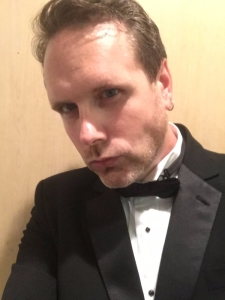 He began writing at a very young age and launched his professional writing career after graduating from Louisiana State University with a BA in English Literature.

His first noteworthy professional writing was in the world of entertainment journalism. He became a movie, TV, book and music reviewer which soon expanded to film history columns and celebrity interviews. Over the years, J.C. has become known in his professional life for interviewing bands such as The Cult, Judas Priest, Faith No More, The Zombies, Bad Religion’s Greg Graffin, Aerosmith’s Joe Perry,  Queens of the Stone Age’s Nick Oliveri and KMFDM.

After writing literally thousands of articles, columns, reviews and interviews for multiple print and online magazines, J.C. published his first novel Seven Days to Die: A Jake Slater Mystery in 2016. He followed this success in 2017 with a collection of short stories and novellas entitled The Pretty Good and Pretty Representative Stories of J.C. Maçek III. This collection continues the hardboiled detective saga of Jake Slater with the new novella The Pestilence of Spring: A Jake Slater Mystery.

J.C. is also an actor, musician, director and film producer. His most recent film is [Cargo], produced by J.C. and written and directed by James Dylan. As producer, J.C. also took the commission to write the novelization to [Cargo] which will be published by Bloodhound Books in early 2018.

J.C. lives in Southern California with his wife, daughters and a veritable zoo full of pets. He is currently working on more Jake Slater crime novels starting with the thriller Hard Core and is looking to expand the mythos of [Cargo].