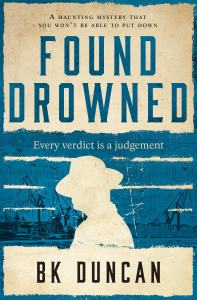 London. 1920 and coroner’s officer May Keaps is tasked with solving the mystery that surrounds the death of a young boy, found drowned in The Thames.

But was it murder or an accident?

May knows that when children go missing, the reason is often linked to money but she is in danger of underestimating the corrupting influence of power . . .

On streets where poverty and exploitation walk hand-in-hand everyone has a price. And some are more valuable dead than alive. But who is pulling the strings?

May must journey into the dark underbelly of London to find the answers. 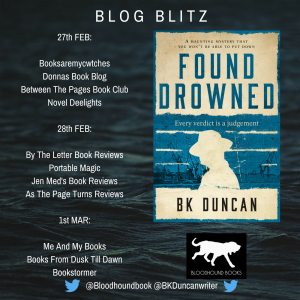 Found Drowned is the second book in the May Keaps series. I wouldn’t say it was essential to have read Foul Trade, the first book in the series, though some readers may prefer to read them in order.

The story line really brings home what life was like in London back in the 1920’s. I don’t mean the pleasant side, but the darker side of London. The treatment of children and especially what could happen to the homeless ones. Like May, my heart really went out to them and it makes her even more determined to get to the bottom of some very unsavoury going ons.

I like that there was a bit of a romance going on in the story with May and Jack. Don’t worry as it is very much in the back ground but you can see the like and respect for each other growing through out. Jack is a journalist and proves to be helpful to May.

As I have come to expect from May, she always seems to be in the right place at the right time, though you could always look at it that it’s the wrong time as she manages to put herself into quite a bit of danger. I wanted to hide my face behind my hands as some of the situations she finds herself in, I couldn’t possibly see how she was going to get out of them. She certainly has a certain amount of luck on her side.

May Keaps is a great character as she is a woman in a man’s world and is up against the snobbery of men thinking she is less than adequate to be doing her job. I think this works in her favour as she is definitely more clued up than they give her credit for and she is good at out smarting them.

Found Drowned is a dark and compelling read that is perfect for readers who want to be transported back in time. This isn’t some fast paced crime thriller, this is an historical mystery to be savoured and enjoyed.

Found Drowned is available to purchase from Amazon. (Please note that link used is an affiliate link)

BK Duncan is the pen name Ruth Wade has adopted for the May Keaps series of historical crime novels.

Born on a steam railway and brought up on the South Coast of England, such beginnings were destined to leave BK Duncan with a love of vintage transport, crashing seas, and Art Deco architecture.

Following a career encompassing developmental learning and change-management consultancy she now combines producing her own work with lecturing part-time in creative writing in colleges and academies in Cambridge and Oxford. Her two great passions are longbow archery and the Argentine Tango. Sadly, she is not nearly as accomplished at either as she’d like.