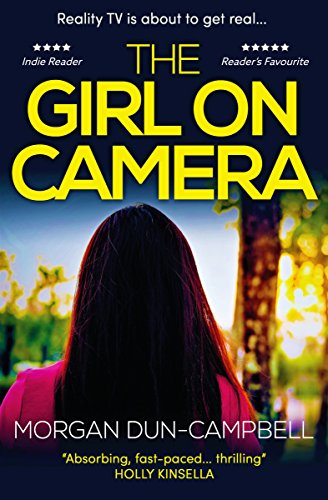 Reality TV is about to get real…

“Are you ready to win the heart of the nation? Compete with seven other contestants for the cash prize? Change your life forever?”

Twenty-six-year old Rory Stevens is thrilled to be selected as one of eight contestants for new reality show: The Retreat.

However, on the second day of filming – during a televised broadcast from the show’s host – all power shuts off with no explanation: leaving the contestants, quite literally, in the dark.

Completely stranded, it is now up to Rory and her seven companions to figure out what is happening.

Until one of them disappears…

The cover and the blurb really intrigued me for this book. Admittedly I’m not a big fan of reality shows on television but having liked the sound of the blurb I had to give it a go. I was unsure whether it might really be more horror than thriller as in a way it does sound like a classic horror story but having read it, it is definitely more of the mystery/suspense genre.

Rory is pretty much just drifting through life whilst playing it safe. She never takes any risk until she gets an email for a new reality show. What I liked about Rory is that she is really normal. She isn’t someone you would ever expect to be on a show like that. She doesn’t crave fame and is doing it more to prove a point to herself.

The rest of the characters in the house are definitely more the type of people you would expect to be on a reality show. All there to boost their egos. The only ones I really liked other than Rory was Jess and Adam. Adam definitely has an air of mystery to him and like Rory, I wanted to discover more.

The Girl On The Camera was an easy read that intrigued me enough to keep on turning the pages. I wouldn’t say there was any real surprises in store as for me there was only really ever one outcome of which turned out to be right. This is more a character driven story rather than a thriller but still overall an enjoyable reading experience.

The Girl On Camera is available to purchase from Amazon. (Please note that link used is an affiliate link).