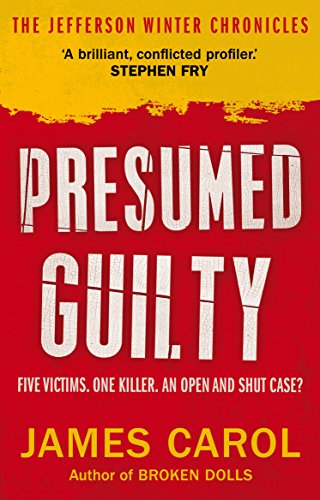 The first in a special eBook only series: The Jefferson Winter Chronicles, featuring Jefferson Winter from bestselling eBook Broken Dolls, and introducing his mentor, Yoko Tanaka. Together they make an unforgettable team.

Special Agent Yoko Tanaka is one of the best profilers in the FBI. She’s observant, smart and professional, but doesn’t really play well with others. She’s been called in to consult on the case of ‘Valentino’, a killer who steals his victims’ hearts. Literally.

With five women already dead, time is running out for the police to catch the killer before he strikes again. Within twenty-four hours of Yoko’s arrival they have a suspect in custody: a precocious nineteen-year-old kid called Jefferson Winter whose IQ is off the charts. He’s also a textbook psychopath and the son of one of America’s most notorious serial killers. Not only does he confess to the murders, he knows details of the crimes that only the killer could know. It’s an open and shut case, or is it?

If you haven’t had the pleasure of reading the Jefferson Winter series yet then this is an ideal introduction. If like me you have read the full length novels, then this short story is an absolute must read.

We get to meet Jefferson as a student who is trying to come to terms with his fathers past actions. Having met and loved Jefferson’s character in the series, it was really interesting to see him in his youth. It took me a while to warm to him as he is very cocky and full of himself. The further into it I got though the more I warmed to him and could see through the attitude.

I really liked Yoko’s character in the story. It is great to see a strong female play the lead in this sort of case and see what was going on in her head.

Presumed Guilty was a cracker of a short story that will not disappoint fans of the series. The case had me riveted as, as usual with this author, they arn’t your bog standard killings which make them more memorable as well as intriguing. A great read when you want something quick that will have you gripped.

Presumed Guilty is available to purchase from Amazon. (Please note that link used is an affiliate link).