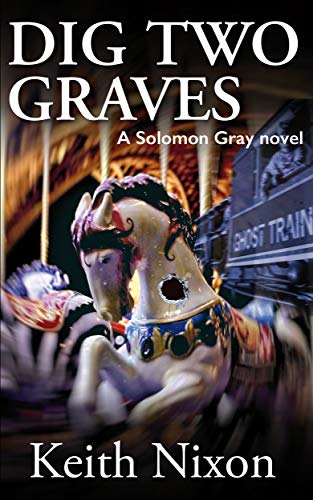 Was it suicide … or murder? Detective Sergeant Solomon Gray is driven to discover the truth. Whatever the personal cost.

When teenager Nick Buckingham tumbles from the fifth floor of an apartment block, Detective Sergeant Solomon Gray answers the call with a sick feeling in his stomach. The victim was just a kid, sixteen years old. And the exact age the detective’s son was, the son Gray has not seen since he went missing at a funfair ten years ago. Each case involving children haunts Gray with the reminder that his son may still be out there – or worse, dead. The seemingly open and shut case of suicide twists into a darker discovery. Buckingham and Gray have never met, so why is Gray’s number on the dead teenager’s mobile phone?

Gray begins to unravel a murky world of abuse, lies, and corruption. And when the body of Reverend David Hill is found shot to death in the vestry of Gray’s old church, Gray wonders how far the depravity stretches and who might be next. Nothing seems connected, and yet there is one common thread: Detective Sergeant Solomon Gray, himself. As the bodies pile up, Gray must face his own demons and his son’s abduction.

Crippled by loss Gray takes the first step on the long road of redemption. But is the killer closer to home than he realised?

Set in the once grand town of Margate in the south of England, the now broken and depressed seaside resort becomes its own character in this dark police suspense thriller, perfect for fans of Ian Rankin, Stuart MacBride, and Peter James.

Dig Two Graves is the first in the Solomon Gray series. Pick it up now to discover whether Gray finds his son in this thrilling new crime series.

Dig Two Graves is our first introduction Solomon Gray who is a Detective Sergeant in the police force. As with many leading characters in this genre, Solomon has his own demons to contend with. He has never forgiven himself for his son going missing and lives with the guilt everyday.

The disappearance of Gray’s son and the subsequent effects it has on him after that event is quite heart wrenching. The not knowing exactly what has happened must be a constant battle to have to deal with. The once normal and happy family he once used to have has all changed. What was sad was the relationships he used to have with some of his work colleagues that have subsequently drifted apart.

I have to admit I was just as intrigued as to what had happened to Gray’s son as I was with the death of a teenager that he ends up being called out to. As the death toll starts to top up though, I was just as desperate to get to the bottom of those as well.

You can’t help but feel sorry for Gray through out it all as he just seems to dig himself into a deeper hole the further into the story we go. It’s as if he is almost on a road of self destruction. Bending the rules where he shouldn’t be and having to deal with the consequences. It makes for some entertaining reading though and I had to keep turning those pages to find out more.

Dig Two Graves is a great start to an enthralling new crime series. It is packed full of mystery and suspense and I hadn’t managed to work anything out until it was all laid out in front of my eyes. This book has definitely made me excited to what is next for Gray and the reader. A tense and gripping read that I struggled to put down.

Dig Two Graves is available to purchase from Amazon and is currently FREE to download.