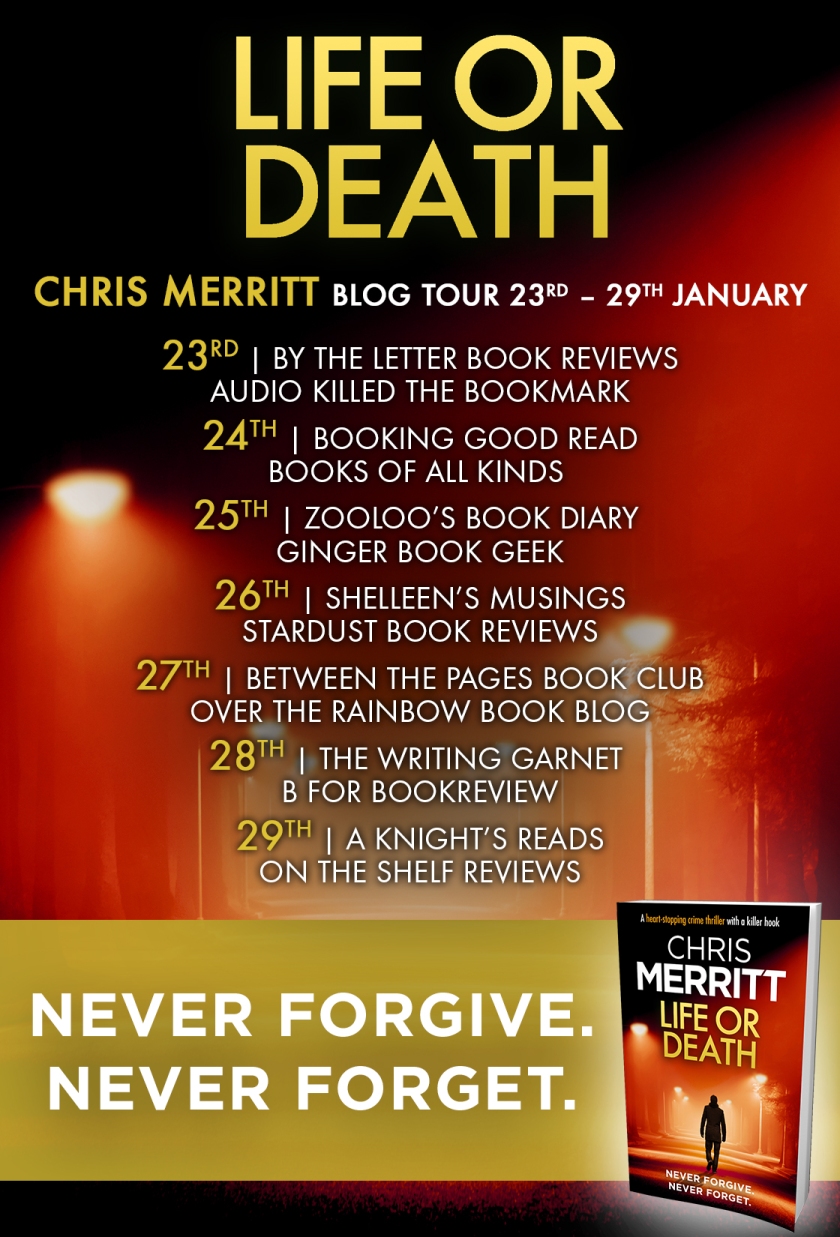 As a detective in the Metropolitan police, Zac is no stranger to murder cases, but this one is different. This is his daughter’s murder.

Years after Amelia died, Zac is still trying to trace the police officer involved in his daughter’s death.

And whilst Zac is prepared to break every rule to find the man responsible, his young and ambitious deputy, Kat, is working on a high-profile case of her own. But she knows Zac is keeping secrets from his team so she’s following his every move.

When one of Zac’s informants is killed, he knows he’s close to catching his man, but before he can act, he receives a call about his son which blows his world apart… And this time, he knows he’ll stop at nothing to save his family.

A gripping and addictive crime thriller for fans of Lee Child, Mark Billingham and Mark Dawson. Life or Death is a unputdownable thriller that will have you reading into the night.

This is the third book to feature Zac and yet another edge of your seat thriller.

This story is all about how far you would go for your loved ones. Not only has Zac and his wife already lost one child, their son Kofi, also now finds himself in danger. I had so much empathy for Zac and his wife. If one thing I have come to learn from this authors books is that if it doesn’t rain, it pours. Poor Zac certainly never seems to get a break that’s for sure.

Kat really stands out in this story. She has to go above and beyond in what to do for the best. It’s always good to get a better feel for other team members and Zac is pretty lucky to have her fighting his corner.

I liked seeing a character from the previous novel turn up in this one. It really added to the whole essence of this story and made it feel more personal. The author keeps us dangling on as to who is behind everything though, making for some gripping reading.

Life Or Death is an absolute nail biter of a read. I think I was more of an emotional wreck than Zac and his wife through out what was happening. I couldn’t turn the pages quick enough to see if things end well for them and Kofi. Kofi certainly pulls on the readers heart strings making you route for Zac in finding the villain. This authors books always leave me on a high and desperate for more. A series that every crime lover should have on their book shelves.

My thanks to Bookouture and NetGalley for an advanced readers copy of this book. All opinions are my own and not biased in anyway.

Life Or Death is available to purchase from Amazon. (Please note that link used is an affiliate link).

Chris Merritt is a Clinical Psychologist and former diplomat based in London, who has been writing on psychology since 2010. In 2014 he decided to combine his Bring Her Back, his debut novel. He currently works on a mental health research project at King’s College London, and part-time as a psychologist in the NHS. When not working or writing, he loves climbing and basketball, and dreams of one day being able to work from home enough to own a whippet.