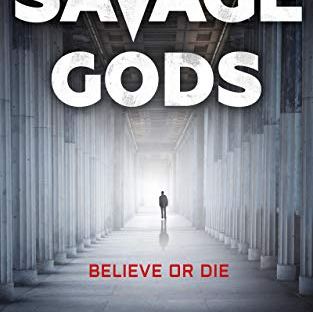 He only kills atheists.

Pray that God’s on your side.

A serial killer stalks the streets of London, murdering atheists in the most horrific ways. So far, it’s only the loud, outspoken ones who’ve been targeted. Specifically, a controversial group of intellectuals called The Four Pillars of Atheism. Attacking religion and angering believers, they’ve amassed enough hate mail and death threats to keep the police busy until hell freezes over.

DCI Roberts and her team have too many suspects and are drowning in leads. The pressure is on her to catch the killer before another horrific murder is committed. Not helped by the fact that London is in the grip of a sweltering heat wave. Desperate times call for desperate measures. DCI Roberts reaches out to John Savage and Tannaz to help her find the killer. Trouble is, Savage has his own personal demon to battle. Can he defeat one and catch the other?

For once in my life I am speechless. It doesn’t happen often, believe me. There is soooooooooooooo much I want, in fact need, to say about this book but I can’t! Impossible without giving spoilers away. For anyone that’s read it, you will understand.

The story works well as a standalone even though it’s the fourth in the series. Savage and Tannaz find themselves helping the police to catch a killer as the usual case being, they are over worked and under staffed. Of course who better to help them than these two. Tanaz is a computer whizz who can kick butt and Savage, well he reminds me a bit of Bruce Willis’ character in the Die Hard films.

There is plenty of action for the crime thriller junkie fans amongst us. The murders are brutal but exciting at the same time. Savage’s mental health comes more under play in this book and it brought out the mothering instinct in me, having me care more about his character than normal.

Savage Gods is a page turning, pulse soaring, thriller of a ride. It has an explosive storyline in more ways than one. One part had me going back to re read as I couldn’t get my head around what was in front of me. Even now, I’m still in shock. Again I wish I could say so much more but Savage fans especially, would not thank me, or probably believe me, for that matter. This is one you need to read for yourself. Powerful and engrossing!

My thanks to the author for an advanced readers copy of this book. All opinions are my own and not biased in anyway.

Savage Gods is available to purchase from Amazon.

After studying to be an architect, Pete realised he wasn’t very good at it. He liked designing buildings he just couldn’t make them stand up, which is a bit of a handicap in an industry that likes to keep things upright. So he switched to advertising, writing ads for everything from cruise lines to zombie video games.

After becoming disillusioned with working in ad agencies, he switched to writing novels (or was it because he just wanted to work at home in his pyjamas?). He soon realised there’s no magic formula. You just have to put one word in front of the other (and keep doing that for about a year). It also helps if you can resist the lure of surfing, playing Nintendo Switch with his son, watching America’s Next Top Model with his daughter and drinking beer in a garden chair.