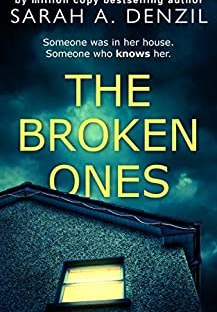 Someone was in her house. Someone who knows her.

“You will know me.” The hoarse whisper comes from a room in the house during the dead of the night. A stranger’s voice recorded by equipment Sophie set up, because Sophie is paranoid that someone is out to get her.

With few people in her life, Sophie spends all of her time either teaching at a primary school or caring for her ailing mother. Suffering from early onset Alzheimer’s disease, Sophie’s mother is a difficult patient, leaving her little time to herself.

But on the day Sophie finally decides to put herself first and go on a first date, strange things begin to happen. She finds a discarded button in the garden. A hand print on the outside of the window. Her confused mother blames new bruises on a ‘shadow’. Who is following her and why?

And then the voice…

After years of emotional abuse, Sophie begins to wonder if her cruel mother is faking her illness and playing tricks on her.

But what kind of mother would do that to her daughter? And what about the man she met online?

To uncover her stalker, Sophie must look into her past, but she might not like what she finds.

Sophie lives with her mum who has Alzheimer’s disease. She has always put her mother first, hence why at 35 she is single and still living at home. You can tell the relationship between both has never been an easy one and have to say I felt very little sympathy for her mother whatsoever.

When it comes to Sophie I had every bit of empathy. Juggling work and her mother is stressful enough as it is. Throw into the mix some strange going on’s that cause Sophie to start becoming unhinged.

There were little niggles that were eating away at me throughout this story. I wasn’t quite sure what to believe, even doubting Sophie herself at times but when she has evidence from recordings and cameras, well it became a whole lot more interesting. One thing I am always guaranteed with this author is a storyline that will have me hooked. I read it over two days and was desperate to get back to it every time I put it down.

The Broken Ones sure makes for a surprising read. I could never have foreseen how the story was going to plan out from how it starts off. It’s quite a sinister and almost claustrophobic read at times with an unexpected ending that has left my head in turmoil. A psychological thriller that really gets under your skin.