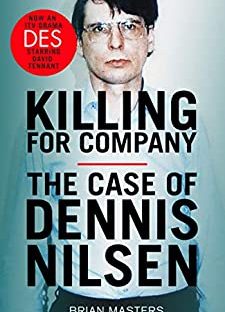 The book behind the hit ITV true crime drama DES, starring David Tennant and Jason Watkins as Brian Masters, and the follow-up documentary The Real ‘Des’

***WINNER OF THE GOLD DAGGER AWARD FOR CRIME NON-FICTION and THE NUMBER ONE SUNDAY TIMES BESTSELLER***
__________________
Dennis Nilsen, who died in May 2018, admitted to killing at least 15 people before his arrest in 1983. This ground-breaking criminal study of his killings was written with Nilsen’s full cooperation, resulting in a fascinating – and horrifying – portrait of the man who worshipped death.

In February 1983, residents of Muswell Hill had been plagued by blocked drains. When a plumber was called to investigate, he discovered a large blockage of biological material. To his horror, it appeared to be formed of human flesh and bones.

The next day, local resident Dennis Nilsen was arrested.

‘Are we talking about one body or two?’ a detective asked. Nilsen replied ‘Fifteen or sixteen, since 1978. I’ll tell you everything.’

Within days he had confessed to fifteen gruesome murders over a period of four years. His victims, mostly young gay men at a time when society cared little for them, had been overlooked. Killing for Company is a unique study of a murderer’s mind, essential reading for true crime aficionados.

Dennis Nilsen is a well known serial killer and after watching Des with David Tennant more recently, it piqued my interest and was intrigued to find out more and this book sounded like it ticked all the boxes.

The author got to meet and know Dennis in the run up to his trial. Dennis was very forth coming with information, not only talking to Brian Masters but he also put it down in writing for him. I think this made it all the more chilling with how willing he was to talk about it all, even drawing pictures of his victims of which some are included in the book.

We get a build up of Dennis’ family background and what life was like for him as a child. This can be a good insight at times as to why a person may carry out these atrocities. I wouldn’t say there is a great deal in his past though that would in anyway warrant what he did. He shows compassion for his much loved dog which made it harder to comprehend what he did to the many young men that he killed.

If you are a lover of true crime books, this is definitely a must read. Some parts where the killings themselves are spoken of in detail were hard to stomach. The author does a good job of giving a well rounded insight of Nilsen’s life from his past to his time killing. Overall I found it an interesting and informative read.